Tax Avoidance in the UK – The Basic Facts

Recent tax avoidance statistics show that this type of activity currently costs the UK around £1.7 billion per year. As of 2016-17, this made up 5% of the overall “UK tax gap” – the difference between the tax that is owed and the amount that is actually paid.

The rest of the tax gap is made up of the following factors: Of the aforementioned £1.7 billion gap that is caused by tax avoidance, around 45% comes from the avoidance of Corporation Tax. A combination of the avoidance of Income Tax, National Insurance Contributions and Capital Gains Tax makes up another 44% approximately, while the remainder is attributed to VAT and other direct tax avoidance. Since 2005, there has been a gradual reduction in the UK tax gap. In 2019 there is still a considerable disparity, however.

During the 2005-2006 tax year, Corporation Tax avoidance peaked at £2.8 billion, while IT, NICs and CGT avoidance stood at just over half that amount (£1.5 billion). Despite being the lower of the two, this figure was still double that of the tax year 2016-17. Avoidance of Income Tax, Capital Gains Tax and National Insurance Contributions has declined by more than half since 2005-06, falling from £1.5 billion to £0.7 billion.

This represents the biggest decrease out of any of the other tax gap factors where customer behaviour has been more consistent. 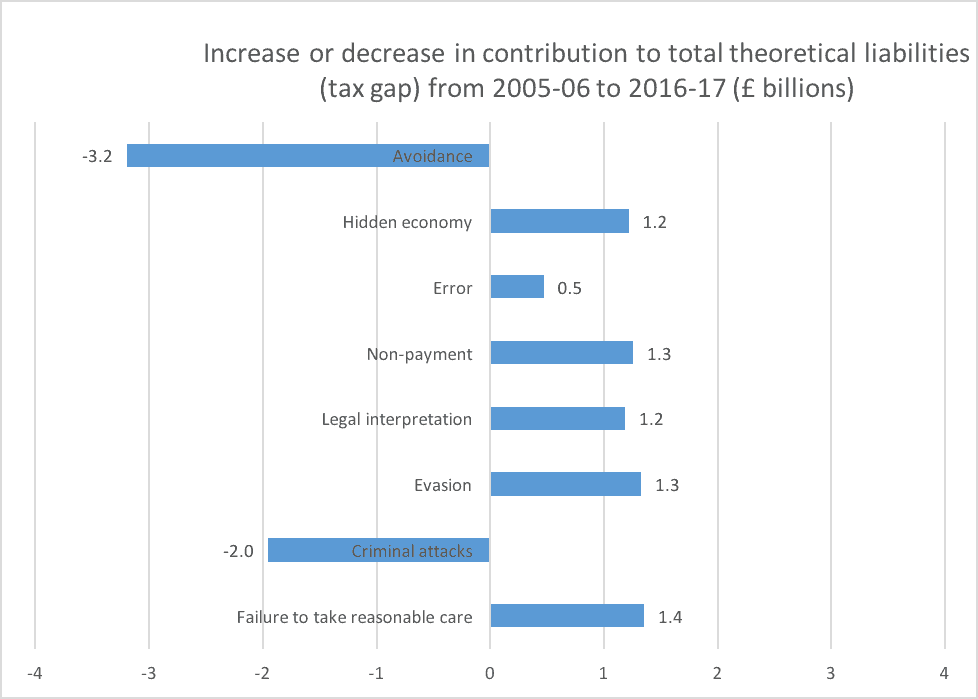 However, compared to the other factors involved in the current tax gap, tax avoidance is the behaviour that contributes towards it the least. “Failure to take reasonable care” is the clear front runner in this field, costing the UK economy £5.9 billion in 2016-17 alone.

Following this is “criminal attacks”, which contribute £5.4 billion to the tax gap, while both “legal interpretation” and “tax evasion” are tied at £5.3 billion to round off the top three most costly factors.

Issues relating to VAT and Self Assessment are also more costly than tax avoidance to the UK economy. Please note that these figures are constantly changing as HMRC updates its methods used to measure the true scale of the tax gap.

The most searched-for topics related to tax avoidance in the UK reveal a great amount of interest in individual high profile cases.

The following search terms have increased in popularity by 5,000% or more over the last five years:

Far more people are searching for information related to these cases, or for general terms such as “tax avoidance schemes”, than are using search engines to discover how they may avoid tax themselves.

“Tax avoidance vs tax evasion” is also a popular search, revealing that users are interested in educating themselves on the semantics of the field.

Over the past five years, most UK-based search activity regarding tax avoidance has focused around Google, Amazon, BBC, Starbucks and singer and TV personality Gary Barlow. However, over the last twelve months, the tax avoidance case of comedian Jimmy Carr has attracted considerably heightened attention. “Jimmy Carr tax avoidance” saw a 250% increase in search volume over the past 12 months.

Recent tax avoidance scandals that have prompted the highest Google search volumes are:

Jimmy Carr’s K2 case in 2012 interested the UK more than any other case, with the peak in search interest for Gary Barlow’s tax avoidance only hitting ¼ of the level of Carr’s peak. In general, tax evasion has had consistently more search interest over the past five years than avoidance. In fact, interest in the latter has slightly decreased, while the former has seen a minor increase.

Tax Avoidance in the UK by Region

Areas of the UK that have previously seen the highest number of disclosures for tax avoidance include:

Brighton, sharing the lowest spot in the top ten, saw an average of 106 disclosures made within a population of 802,830. That equates to 13 disclosures in 100,000 people.

This figure matches that of Dartford, which saw 57 disclosures in a population of 430,560. One major tool used in tax avoidance is Disguised Remuneration. This was a method whereby employers would pay money into a trust fund, which would then be distributed to employees or contractors in the form of a “loan”. This loan was never intended to be repaid, but labelling it thus allowed both the employer and the employees to avoid paying duties such as NICs and Income Tax.

Those involved in a Disguised Remuneration scheme have now been ordered by the UK government to pay all taxes on the total amounts they have been “loaned” under Finance Act (No.2) 2017. This will be applied as tax on one years’ income. It is known as the “loan charge”, and came into effect in April 2019.

Because there are estimated to have been around 500,000 users of Disguised Remuneration schemes – and with 70% having used their scheme for two years or more – the payout from this action be the government is predicted to be considerable – potentially bringing in an extra £3.2 billion for the public revenue over the next five years.

The below breakdown of those affected by the loan charge reveals that they fall mainly into the following categories: The tax bills for people who repeatedly used these schemes will be higher than those who have used them once, and as a result of their use of this method, users of these schemes will, on average, have brought in around twice as much income as a typical UK taxpayer.

In conclusion, while the UK tax gap is gradually becoming smaller, Corporation Tax and IT, NICs and CGT remain the most costly areas when it comes to tax avoidance.

At the current time, the UK towns seeing the highest numbers of tax avoidance disclosures are in the south of England, with the exception of Edinburgh, which sees the second most.

As part of their continued focus on closing the tax gap, the government’s action regarding Disguised Remuneration schemes is likely to direct a considerable amount of previously unpaid tax back into the UK’s public revenue.

What is the stamp duty cut announcement? Stamp duty land tax in England and Northern Ireland on residential property has from today (23 September 2022) been…

Do you pay stamp duty on property in the Metaverse?

The metaverse is what an estate agent might deem a ‘project’ – a ‘blank canvas’ in an ‘up-and-coming area’. That is to say that the metaverse…